Who Wins Between The French Oven Vs Dutch Oven? A Buyer’s Guide. 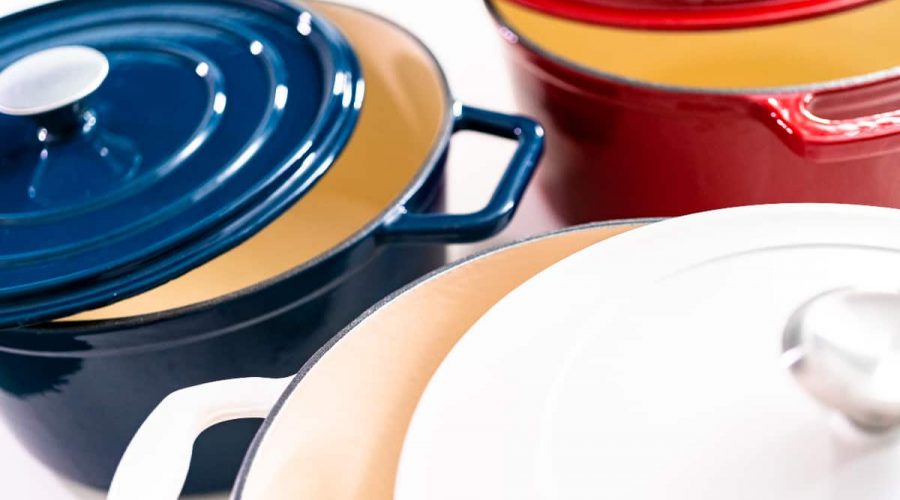 Dutch ovens and French ovens are very similar in design. They’re even often referred to as the same thing. But did you know they’re not the same thing? Did you even know there was a difference?

Read on to find out everything you need to know in the French oven vs Dutch oven debate.

My personal favorite is the Cuisinart 7 Quart Casserole. Quality at a reasonable price, in a versatile 7-quart size.

The Dutch oven has been around since the early 1700s. This laborious cookware is a marvelous invention that consists of a heavy-duty pot with a tight-fitting lid to match.

The most common misconception surrounding the Dutch oven is what material it’s constructed from. Scroll through a list of soup or baby food recipes and you’ll quickly discover that enamel-coated cast iron pots are often referred to as Dutch ovens. However, this is very misleading.

Dutch ovens were originally made from raw cast iron. Around the beginning of the 17th century, the Dutch began producing high-quality cookware made from iron. This was thanks to the discovery of a new technique that let foundry workers cast metal using sand molds.

If you know anything about cast iron, then you know how durable this material is. You also know it can endure high heat. This means they are excellent cooking vessels for the stovetop or oven. You can even use them on the grill or over a campfire if you like.

What is a Dutch Oven Used For?

There are so many wonderful ways you can use a Dutch oven. You can sear, braise, deep-fry, and bake just to name a few.

Due to their snug lids, they trap in heat and moisture better than your average lidded pots. That makes them a terrific tool for cooking stews, soups, and sauces. Or really, any recipe that you want to trap in moisture.

How Do I Clean A Dutch Oven?

You should clean them just like you would any other cast iron cookware. Sometimes, this is as easy as wiping it out with a paper towel and rubbing it with some oil. Other times, it means some serious elbow grease.

If you’ve got quite the mess on your handles, you’ll need to scrape off any stuck food. This can be done with a silicone scraper, sponge, or dishcloth. For serious jobs, you can use a metal scouring pad. Don’t worry, cast iron is tough so it can take it.

From there, you’ll handwash with mild soap if necessary. Some purest refuse to use soap but even Lodge Cast Iron says it’s okay.

Soap or not, you’ll need to make sure you dry your cookware thoroughly so it doesn’t rust. Season every inch of the Dutch oven and it’s good to go.

Here are some of my favorites:

So, if Dutch ovens are made with cast iron, what in the world is a French oven? A French oven is very similar, except for one major difference. That difference is the coating.

French ovens are also made from cast iron. However, they have a slick enamel coating. This means that the colorful enamel-coated cookware you’ve been referring to as a Dutch oven is none other than a French oven.

In essence, this makes a French oven a type of Dutch oven. But not the other way around. So why all the confusion? Looks like we’ll need another history lesson for this one.

In 1925, Le Creuset began to manufacture Dutch ovens with an enamel finish. To set this product apart, they dubbed them French ovens or the french term, cocotte. This was the first record of a foundry using an enamel coating on Dutch ovens.

Yet despite the French oven’s popularity, the name never really took hold. Luckily, the technology did. You can now find numerous manufacturers who produce French ovens – or enamel-coated Dutch ovens as most brands label them.

What is a French Oven Used For?

Like a Dutch oven, a French oven has many uses. It can simmer, stew, roast, bake, boil, and more. The durable enamel coating is super slick making it a superior choice for meals that can benefit from the nonstick coating.

For instance, it’s excellent for baking bread or whipping up a cheesy casserole. I’ve even found it’s my best tool for perfectly poaching eggs.

How Do I Clean a French Oven?

Even if the manufacturer claims your French oven is dishwasher-safe, don’t do it! The enamel coating will take a beating if you repetitively use the dishwasher. You can do this only so many times before it begins to wear off.

I recommend doing things the old fashion way and handwashing your French oven. Use a mild soap and avoid abrasive cleaning materials like metal scouring pads. These will scratch the coating and expose the cast iron underneath.

Here are some of my favorites:

Which One is Better?

You’re probably wondering which is better, a French oven or Dutch oven? While both have their benefits, it depends on the jobs.

Dutch ovens are all cast iron. This makes them the ideal choice for cooking with high heat. Toss them on a campfire for a hearty stew or roast chicken in the oven.

While French ovens are oven compatible, I don’t recommend using them over a campfire. High heat like that has the potential to crack the coating.

However, there are plenty of benefits to the coating. It provides a slippery surface that easily releases food. This means less fighting when trying to get out a slice of casserole. Without the coating, the only way you’ll achieve this is by using more cooking oil.

Also, the enameled coating gives French ovens a smooth bottom. This is great news if you have an induction stove. Meanwhile, you need to be very careful with a Dutch oven because cast iron is rougher. This can easily lead to a scratched stovetop.

Then there’s the issue of maintenance. If you own cast iron cookware, you know the drill. Cast iron needs proper cleaning and seasoning to prevent it from rusting. Dutch ovens fall under this same category.

French ovens are a bit different. The enamel coating doesn’t require the same seasoning. So maintenance for French ovens will be much easier.

French Oven vs Dutch Oven. Are They Interchangeable?

The answer is yes and no. For most of your meals, you could use either and achieve the same results.

As I previously mentioned, Dutch ovens aren’t ideal for induction stoves. And you should never use a French oven over an open flame.

There you have it! Now you can impress your friends with all your knowledge about French ovens vs Dutch ovens. I hope this has been an enlightening experience on your quest to perfect the craft of home cooking.

If you’re looking to add one of these to your cookware collection, I’d recommend the Cuisinart 7 Quart Casserole. Most home chefs will appreciate the versatility of the 7-quart capacity and the enamel coating provides easy food release and cleanup.

And remember, French ovens are a type of Dutch oven, but they aren’t the same. If it comes with enamel, it’s French. If it’s heavy-duty cast iron, then it’s a Dutch oven. Happy cooking! Carissa Stanz is a food writer and product reviewer. Getting her start slinging coffee, she has over a decade of experience in the food and beverage industry. Filmmaker by way of education, she’s hitting the books again, pursuing a remote degree in Fisheries and Wildlife Sciences from Oregon State University. When she’s not working, you can find her whipping up tasty recipes and obsessing over kitchen gadgets. She loves cooking over an open flame with a cast iron skillet and can’t resist a fresh bowl of poke. Why Experts Recommend Meal Planning For Every Home The Best Coffee Maker Under $100 For Every Home